Tere from Tallinn,
Our trip to Tallinn began at a bus station in St Petersburg.  Our taxi had been organised by our hotel, our driver knew where the bus station was, but wasn’t quite sure where to drop us off……so he asked us!..not a good start!  Finally he parked the car and ran across the road to a group of people assembled on the medium strip, confirmed that they also were waiting for the bus to Tallinn and this was the place to be.  Before too long a big shiny blue and grey bus appeared from around the corner……luggage was loaded, tickets and passports were checked seating re-arranged (I had seat 5 and Barbara had seat 8) we were away.

A Russian woman sat in the front seat. She wasn’t just good at talking, I think she invented it; she could talk….for hours…..and hours…..on and on!  This woman breathed ‘intravenously’ so she could keep going…and even though I couldn’t understand her…you sort of know she was talking ‘dribble’…..in photography you can freeze a hummingbirds wings with a shutter speed of 1/5000th of a second….I reckon if you took a photo of this woman, shutter speed 1/6400th second, you would still get lip blur!….she could talk!

We took a couple of hours to get to the Russian, Estonian border, the bus pulled into the passport control building, parked behind several other buses and cars.  The bus driver got off the bus went over to the guard box window with all the necessary paperwork, the co-driver opened the entire luggage and engine bay compartments ready for inspection by guards and dogs.  A soldier came on board the bus, issued some orders, the people who understood him began to rise from their seats, collect all their belongings and leave the bus….we followed….we got all of our luggage from under the bus and went into the ‘drab’ light green building. Once inside, we formed another queue and finally placed our luggage onto the conveyor belt to be X-rayed, then went to the next queue, passport control.  After everyone was through passport control we waited as a group before the door was opened and we took our luggage and re-boarded the bus…….we then drove 200 yards through no-man’s land to the Estonian border and waited at the ‘razor wire’ gates and fence for passport control again, this process took about two hours…..all with the accompanying ‘babble’ from the front seat…..passports all stamped, welcome to Estonia.

We arrived in Tallinn and found our accommodation, The Romeo Family Apartments.  After signing in we were shown our apartment, it was huge, imagine our excitement when we discovered there was a washing machine in the bathroom…..a sight for travel weary clothes….the young lady showing us the room could not believe our reaction to the discovery of this amazing device!…first things first…a load of washing….funny, when you’re home, this is a chore, when you haven’t seen a washing machine for a week, it’s an absolute pleasure!

Tallinn is a very beautiful old city, as we walked through the lovely little streets and archways a familiar and enticing smell began to fill our nostrils…..coffee!  We found a fantastic little coffee house and sampled their brew…. Best coffee and cake since Italy!

In the afternoon we visited the Alexander Nevsky Cathedral, a grand ‘Russian Revival’ style Cathedral built between 1894 and 1900 while Estonia was part of the Russian Empire.  Many Estonians disliked the building as it was seen as a symbol of oppression, it was scheduled for demolition in 1924 but this was never carried out. The building became more run down and dilapidated until in 1991 when Estonia gained its independence and a complete restoration took place.  We visited the ‘Nuns Tower’, part of the City Wall, before heading to the Centre for Puppet Arts Museum.  The Estonian State Puppet Theatre was founded in 1952 by Ferdinand Veike and remained under his leadership for decades. It is a fantastic museum containing sets and costume design drawings, a huge collection of puppets collected from the entire 60 year history of the theatre.  At 1pm everyday, a 20 min. show takes place in the main theatre; four actors take everyday articles and bring them to life during the show. It’s a fantastic museum and well worth a visit.

The next day we visited the port area to buy our ferry tickets for the journey to Helsinki.  The port district, like many port districts in the world, is undergoing a transformation similar to Fremantle, Hobart and Port Adelaide, where many of the old unused buildings are being re-designed and rejuvenated through wonderful architecture and design, turning derelict dumping grounds into vibrant and exciting areas full of new businesses, restaurants, shopping areas and of course, people!

We made many more stops at our ‘new’ favourite coffee shop before boarding our ferry and making the 80k journey to our next destination, Helsinki, Finland. 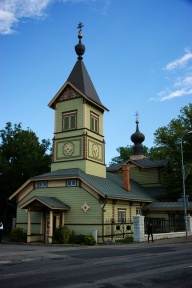 (hover mouse over photo for caption)