Moi from Helsinki
On our first morning we picked up our hire car and got acquainted with our new friend Timo Tom Tom. We keyed in the destination and started our trip.  ‘Hilda’, out friend in Germany was in some ways quite circumspect in her approach to giving us directions, for instance, on our first attempt at getting to a launderette in Regensburg she directed us around the outside of the city, a trip of about 9 k’s….we ended up about a kilometre away from our where we started. Timo, the testosterone charged Tom Tom was not as timid…straight out into the centre of town……with the added traffic hazard….. TRAMS!..cars, pedestrians, buses, cyclists and trams …..There’s a lot of ‘T’s’ in that paragraph…let’s add ‘terrified’…after about a half hour of this torture, (another ‘T’) we made it to the open road and began our discovery of country Finland.

The speed limit while driving on the motorways is 120kph, and 100 on other roads generally.  Every intersection has the lower speed limit of 80 and usually about 50 metres after the change of speed sign, there is an accompanying ‘speed camera’….the speed changes are constant and it’s hard to remember what speed you’re meant to be doing…apparently, if you are caught speeding in Finland, the fine is based on your income…..could be a problem! ‘Timo’ sounded alarm bells at every camera sighting, he almost wore himself out!

The Finnish countryside is very beautiful. Rich fertile farming land, and lots of lakes. Finland is known as the land of a thousand lakes because it has in excess of 180,000 lakes larger than 500 square metres.  A combination of pine and silver birch trees lined the sides of the roads for a lot of the way; the silver birches were beginning to change colours as autumn had just begun.  Red barns were also a frequent sight as we wound our way northward, all the while being amazed at the beauty of this wonderful country.  607 kms later, we arrived in Oulo, a city about half way up on the west coast, population, about 150,000.  The next day we headed further north to Rovaniemi, situated 5 kms south of the Arctic Circle and the official home of ‘Santa Claus’ and also home to the world most northern branch of the ‘Golden Arches’…Macca’s. 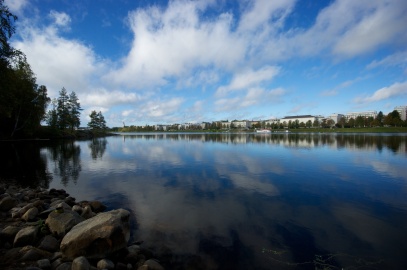 The city is the administrative capital and commercial centre for Lapland, the northernmost province of Finland. We booked into the Santa Claus Hotel (not as kitsch as it sounds) and then headed out to Santa Claus’ village and the Artic Circle, to see if the ‘Grand Old Man’ was at home………we were in luck….he was!…….and Barbara sat on his lap! (well next to him). The next day we visited the very comprehensive and fantastic ‘Arctic Museum’ and the local Cathedral, as well as lots of walking around this cold and wet town.

We left Rovaniemi and headed 511 kms south to the city of Kuopio, in the northern lakes area. With a population of about 97,000, it is the ninth largest city in Finland, situated on the lake and is very beautiful.

A yearly World Cup Ski-Jumping competition is held on the ski jumps on the hill of Puijo, the Puijo Tower also adorns the top of the hill. Kuopio is also famous for its association with the Finnish delicacy, Finnish Fish Pastry.  Before leaving the town we visited the Tower on the hill and saw lots and lots of clouds….and more clouds!

We headed back towards Helsinki to the city of Tampere, where there were major infrastructure works going on, temporarily closed roads etc, this unfortunately sent ‘Timo’ into a bit of a spin…..alerts on the screen advised to ‘connect to a computer for crucial downloads immediately’.  Another search for the dreaded Laundromat took place that evening…..the first one we went to didn’t exist, so we went back to the Hotel for further advice…we finally found one 7 kms away on the other side of town and even though ‘Timo’ was having major ‘hissey fits’, we got the washing done.  It was explained to us on several occasions that Laundromats were really not part of Finnish culture and were a very rare commodity! (Tampere, 2nd largest city had only 1!!!!)

Next day we were back in Helsinki. We returned the car and a ‘steaming and smoking’ Timo (the second GPS left in ruins), and wandered around for a while before heading back to our hotel – at the airport so we didn’t have to move luggage twice. 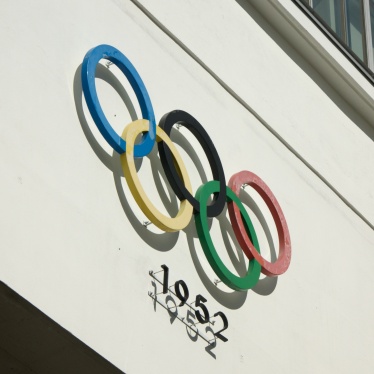 The next day we caught the bus into Helsinki and went to the Design Museum and then caught the tram out to the Olympic Stadium to view the place where the ‘Lithgow Flash’ won gold in 1952.

We went up the amazing tower that was designed to be a landmark for the complex.  The stadium was a hive of activity as the ground was being prepared for the World Cup match between Finland and France on the following Saturday night.  We also visited the statue for Sibelius before heading over to the waterside to visit a fantastic outdoor café Regatta, where you can have coffee and cake, or grab a sausage and BBQ it over the red coals of the constantly burning open fire. This wonderful little place has a constant stream of people that seem to love the atmosphere; the little birds are very brave and will land on the table and steal your food if you aren’t watching.

Finland is a wonderful country with lovely people that are extremely friendly and helpful. They switch between languages (Finnish, English German….) with absolute ease. We really enjoyed our time is this beautiful country……..next, Scotland, out to the west and into the highlands, more fresh country air…….