You can’t visit Scotland without realising that the game of golf is particularly important here. So we crossed the Tay Bridge and went to ‘The Home of Golf’, St Andrews.  Some people book up to a year ahead just to live their dream, and play a round on the ‘hallowed ground’ that is so famous all over the world. Not all of them are great players. I saw my share of ‘hackers’ during our visit.

We visited the Cathedral, founded in 1160, consecrated in 1318 and pillaged in 1559 during the Reformation. Only a small portion of the ruins still stands today. We climbed St Rule’s Tower and had magnificent views of the town and surrounding countryside.  We also visited the Castle, which is mainly in ruins, but with fantastic views of the coastline. We had the added bonus of watching fighter jets flying in formations overhead in preparation for an upcoming ‘Air Show’ to be held at Leuchars RAF base nearby.

A short distance away from St Andrews is the rugged coastline of East Neuk, home to some picturesque little fishing villages. We visited Crail, Anstruther and Pittenweem, the major fishing village along this stretch of coastline.  At this time of the year the fishing fleet is in the harbour, lobster pots are piled high on the jetties and wharfs while repairs and maintenance work is carried out on the boats and associated equipment. 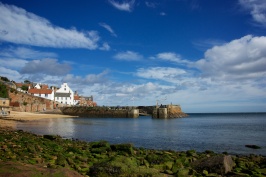 We arrived at the outskirts of Edinburgh at about 12.30pm, and used my iPad and ‘Google maps’ to get to Maryfield St, home for the next three days.  We booked an apartment through Airbnb and had an appointment with James, the owner of the apartment at 2pm.  We finally arrived at the street, after a few diversions. A tiny little thin dead end street with cars parked in both directions on both sides of the street. We were both busily searching for the elusive street number…..couldn’t see many numbers so, I decided to park in the one remaining car park in the whole street, just happened to be No. 58, we had arrived at our destination, sheer luck!  We met James, dumped our bags, cleaned any rubbish out of the car in preparation for the, what had been described as a quite simple exercise….’just return it to our office, we are situated on Waverly Bridge, at the train station…….YOU CAN’T MISS IT!!!….wanna bet?  The first part easy,…..turn right into London Rd, left into Princes, follow that around through several name changes, make a left onto Waverly Bridge…….simple. You remember the major infrastructure roadworks that had been following us everywhere we went…..they were here……..a new tram line….road dug up…closed ahead, simple, turn early, a left, right and another right, we’re there…..no…..the road we want passes below us…after what I’m sure were minor traffic breaches on my part we got to Waverly Bridge……..Europcar Office……..NO OFFICE, but lots of buses, taxis.  We had had a similar experience in Berlin while returning the hire car, so we did what we did there and followed the P for parking stations down an entirely different direction, found the Europcar green signs and ‘voila’….we couldn’t miss it! 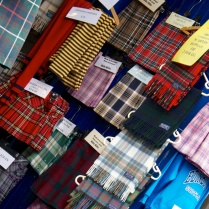 I had seen Edinburgh before, when I visited there in 2000 to perform at the Edinburgh Military Tattoo. I loved the city then, but this time I saw the city through a different set of eyes. It’s a very beautiful city filled with amazingly kind and friendly people. We very much enjoyed our visit.  Firstly, Edinburgh Castle.  As we approached the Castle from The Royal Mile, I could see much of the Tattoo infrastructure still in place. There were a lot of cranes and people busy dismantling the seating grandstands. We made our way past ‘Cannonball House’ onto the Arena and into the Castle.  We had earlier in the week bought a ‘week pass’ to visit castles and sights during our visit to Scotland. These were sold to us at Stirling Castle on the promise that if you visited enough castles over the 7 days, this would make it cheaper, but the biggest selling point was…’you won’t have to wait in a queue to visit Edinburgh Castle……there’s always huge crowds there!’  It felt good walking past the extremely long queues and entering the castle in a more relaxed state of mind, £37 each well spent.  We stayed for the ‘Cannon firing’ at 1pm, even though she knew it was coming, Barbara still jumped about a foot!

We also visited the Scottish Parliament and went in to watch a debate/question time for about a half hour or so. It was very polite and orderly…not like the absolute ‘rabble’ that happens in Canberra, in our so called adversarial system…….give me polite and well mannered any day. By accident, after walking along the Royal Mile and over to Princes street, we also found ourselves on the top of Calton Hill where we were able to admire the view before descending to where we were living.

Next day, Arthurs Seat, the wind was blowing, the sky was blue with lots of cloud, the sun was even shining, when we started our ascent.

Then the wind was howling, the sky was grey, white with tiny patches of blue and the sun had ceased to shine!  We made it the top and the sun did come out, before returning to the bottom for a visit to Holyrood Castle, a wonderful building with an amazing history!  We then went to a pub for lunch, first celebration for Barbara’s birthday!  The afternoon was spent shopping…..for me……we were going to have a second celebration that night at an upmarket restaurant……neat casual……not jeans and long sleeve ‘T’ shirt!…….We acquired the necessary attire before returning to home base….plenty of time, the restaurant is booked for 7.45, it’s only 6pm. I guarantee, a minute later I looked at my watch, it was 7pm. The quick shower became quicker, some fever pitched ironing, the iron was going that quick, I didn’t need to turn it on, the friction did all the heating! Anyway, we made it to the restaurant and we celebrated B’s birthday again. We had a great meal and a fantastic night! Early to bed…..we have to catch the train to London in the morning!