Cześć! From Krakow
Our train trip from Prague was to say the least, interesting! Our Eurail pass didn’t cover Poland so we needed another buy another ticket to get us from the Czech border to Krakow This also involved a change of trains not long after we crossed the border. We were on an older train, but still an EC train, that was comfortable and fast until we crossed the border into Poland…the further we went, the rougher the ride….I’m convinced we were on corrugated rail lines!  We arrived at the station where we had to change trains, bid farewell to our fellow passengers and waited on the platform for our next train……a small silverish and red train made its way towards us; square fronted, little lights for eyes and a very sad little face. This was a train that had seen much better days……..before ‘Thomas’ had even been thought of….this can’t be OUR train, we thought, it’s just passing through to the yard for retired trains…….WRONG!!

We boarded the train, the interior was very 50’s, that’s 18….not 19!  Laminex wood panelling and slippery bench seats……the best was still to come.  We left the station….at least I think we left the station…..remember the snail from Prague….he was there again but this time as hard as the little red ‘Caboose’ tried,  we couldn’t catch him.  I had had some water and needed to go to the toilet….I held on…..and on….the bumpy rail line won in the end…..’be brave’ said Barbara sitting cross-legged on the bench seat opposite.  I had to go!

You know how they used to say don’t use the toilet in the station……know what I mean, it was a ‘long drop’…a long drop on wheels!….and it was that slow I could count the ‘sleepers’ as they went past!

Finally our little ‘Thomas’ drew into Krakow Station….Barbara did a ‘Usain’ like bolt in search of a WC on solid ground!

We got to the accommodation, dragged the two suitcases up three flights of stairs and then went out into the main square of the town…..what a beautiful, fantastic city. 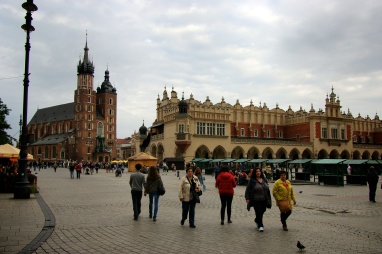 The main city square is huge, 12 acres of paving surrounded by restaurants and shops. There were outdoor, umbrella covered eating areas almost all the way around the perimeter of this huge square and in the centre stood the Renaissance Cloth Hall, a very grand building, the centre of which is now very neat stalls and souvenir shops.

All of the outdoor restaurants have red blankets draped over the chairs for use by patrons as the temperature drops in the evening. We had dinner at one of the restaurants listening to a nice little Jazz Quartet playing standards, wrapped in our red blankets as we kept our fluid levels up!

The next day was Assumption Day and so a public holiday. All the churches held services pretty much all through the day and all the shops (except souvenir shops) were closed. Krakow is a really beautiful city, not too big and has a very lush green belt around the old city. We walked around following our little map and visited most of the sites and went into churches when we could. We listened to a choir accompanied by a small instrumental ensemble rehearse in one church – it was beautiful and good to sit and listen to music without the hoards of tourists. We also finally got to see a Jewish temple that was not a museum. Thank you Matt Carey for the vegetarian restaurant recommendation – we really enjoyed our meal there. 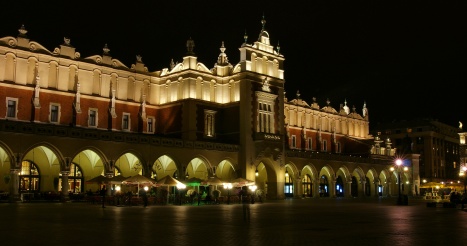 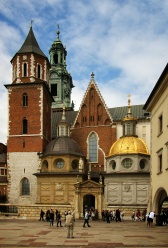 The photo below is of Jack Peter, born on 23 August with his very proud parents Phil and Neralie